In a recent post, I provided an overview of the How Hiring Process Impacts Performance matrix shown below. It demonstrates the concept that the quality of the process a company uses to hire people is a great predictor of the quality of the people actually hired.

Given this, all a company needs to do to improve its hiring results is to benchmark how the best people were hired and then scale these “best practices” throughout the company. This is a basic UX design concept but too many hiring managers believe the “U” in UX is them. It isn’t.

So once you convince the hiring manager the “U” represents all of the great people he/she wants to hire, you need to figure out how these people are actually hired. This is explained below. 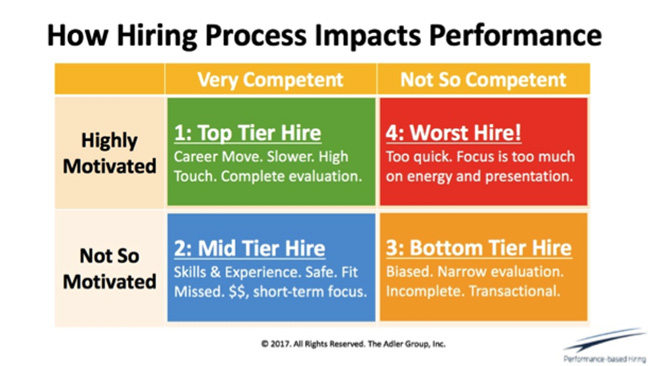 Tier 1: Great hires. These are people who are both fully motivated and fully competent.

Tier 2: Mid-tier hires. These are people who have the skills and experience to do the work but aren’t highly motivated to do it. They’re typically hired to fill jobs which weren’t fully clarified before they were hired.

Tier 3: Bottom-tier hires. These are people who are competent to do some of the work but not motivated to do all of the work. These problems are typically due to a transactional process, lack of clarity around real job needs and an incomplete or biased assessment.

Tier 4: Bad hires. These are people who are marginally competent but have an issue that surfaces after the person was hired that causes problems, including demotivating others.

Anyone who has been in the workforce for a year or two has experienced or met people who fall within each of the tiers. It’s fairly obvious that each situation is predictable based on the underlying recruiting and interviewing process used to hire these people.

Minimizing Tiers 3 and 4 hiring problems needs to be the first step in any hiring process redesign effort. Slowing down and conducting an in-depth behavioral interview will quickly solve most of these types of problems. But shifting your emphasis to hiring more Tier 1 candidates and fewer Tier 2 requires some significant reengineering efforts.

How to make the big shift to Tier 1 hiring

The funnel in the graphic below explains it all. Recruiting Tier 1 prospects requires a process comparable to discovery selling. Moving someone from an interested prospect to a final candidate is far different than selecting someone who has already expressed a desire to work at your company. 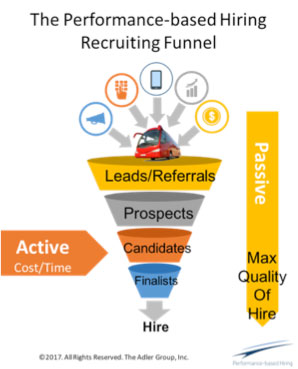 One of the big steps is recognizing that a process weeding out unqualified candidates is fundamentally different than one designed to attract top people who aren’t looking. This requires a combination of permission marketing, nurturing-based CRM systems, a great deal of networking and a lot of handholding on the part of the hiring manager and recruiting. The key strategic point to recognize is that you can’t have a surplus of talent process (driving people to the apply button) when a surplus of talent doesn’t exist. In this case you need to drive people to a “let’s have a discussion button” using a compelling reason to talk.

One of the most compelling reasons to talk is to offer the opportunity to put the person on a different career trajectory. However, to hire the person within a reasonable compensation requires proof that the opportunity is superior to whatever else the person is considering, including their current situation.

One way to open up the conversation and make the case is to use the idea that any career move needs to offer a non-monetary increase of at least 30%. This “30% Solution” is the sum of a bigger job, a job with more impact, a job that offers a more satisfying mix of work and one that offers faster learning and growth. Obviously, proving this requires extra time and more due diligence on the part of the company and the candidate. However, by spending more time with fewer people the time-to-fill and cost per hire metrics are the same, but the win is a significant increase in quality of hire.

The big stumbling block in all of this is the continued use of job descriptions that are over-laden with too many requirements. These need to be put in the HR parking lot. Their replacement needs to be a performance-based job description that defines the job as a series of challenges wrapped inside a compelling and customized employee value proposition. That’s how you attract the person’s attention, assess their ability and motivation to do the work and prove that your opening offers a 30% non-monetary increase. If it does, compensation will become a more reasonable negotiating item.

Shifting to a Tier 1 hiring process starts with the recognition you need to do it. But even when it’s made, too many companies forget who the “U” in the UX is. In this case, they go down a path of process improvement rather than process redesign and never realize they’re on the wrong path.