According to a recent Wall Street Journal article, job hopping is on the rise and that may not be a bad thing. In fact, for the right reasons it could be good. Very good. Or it could be bad...very bad. Figuring out the difference is essential when recruiting passive candidates.

This post will walk you through how to determine the good vs. the bad and how to turn what you’ve learned into a recruiting advantage.

To start this assessment, during the work history review, I like to ask candidates why they change jobs and if the moves were successful. And, what I’ve discovered is that most people take jobs for the wrong reasons. As a result, the job rarely delivers on the promise, and they end up moving on. This dilemma is shown on the Job Seeker’s Decision Grid graphic. The result is Job Hopping Syndrome. 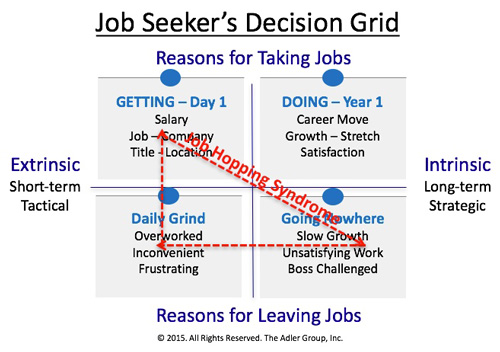 It turns out that most people leave jobs for one of the two reasons on the bottom half of the graphic. The Daily Grind box in the lower left of the grid represents all of the short-term extrinsic frustrations of the positions. The Going Nowhere box in the lower right represents a career that has stalled – these are the long-term intrinsic reasons.

Regardless of why people leave a job, too many people take new ones overvaluing the Getting – Day 1 reasons in the upper left. In the process they minimize the importance of the long-term career opportunity represented by the Doing – Year 1 box in the upper right. This is the primary reason U.S. job satisfaction is low and voluntary turnover is higher than necessary

What this means for recruiters

A pattern of taking jobs for the short-term benefits jumps out during the work history review. Once revealed, it offers a great way for a recruiter to intervene if the job being represented offers a true career move. Here are some ideas on how to use the grid to help persuade a candidate to job hop while making the right career decision.

The bigger point of this approach is to ensure candidates change jobs for the right reasons. Too often, in the rush to close, the long-term consequences of bad hiring decisions are ignored. Diagramming a candidate’s past decision-making using the Job Seeker’s Decision Grid will allow the person to make the correct decisions in the future. More times than not, the correct decision will be accepting your offer.

Why Job Hopping Can Kill Your Career

Few people realize that there are two job markets. One offers ill-defined jobs; the other clear career opportunities.

Consider that around 20 percent of the people in any job category are actively looking to change positions at any given time. Most of these people are willing to take jobs that represent lateral transfers. Most of the other 80 percent are open to changing positions but won't unless the new position represents a true career move.

While companies actually want to hire people interested in career moves, they continue to advertise jobs. This is the result of a misguided talent-acquisition strategy. As a result, they narrow the field to people who are skills qualified, who are active candidates, and who are willing to take lateral transfers. Since the jobs are ill-defined, it's not clear that they will be satisfying in the long term.

I contend that this is why the U.S. employment disengagement rate has been at a dismal 70 percent for the past 15 years. To me, easy access to open jobs and too much short-term thinking are the causes. For example, when a job situation becomes difficult or too challenging, it's easier to change jobs than to work through the problem. As a result, we've made job hopping acceptable. This is a problem every job seeker and every hiring manager needs to address and avoid.

I started realizing that short-term thinking was a real problem more than 30 years ago, when a candidate of mine rejected an offer a client was making to accept another one instead. He told me the other offer was for more money (about 5 percent), a better title, and a shorter commute (30 minutes per day), all of which seemed preferable to him despite the fact that this other job was in an old line-industry versus one involving the latest manufacturing techniques.

I told him he was making a long-term decision using short-term information and that he should think about it. He called me the next day, agreed, and accepted my client's offer. Eight months later he called and thanked me for the short- versus long-term advice. He had just gotten promoted with a big salary increase.

Multiple experiences like this eventually led to the development of the Job Seeker's Decision Grid, shown in the graphic above. An interviewer can use the grid during the work history review to determine if the candidate is a job hopper or a discriminating career mover. Job seekers can use it too to avoid taking jobs for the wrong reasons. Here's how.

If the person isn't leaving. Passive candidates and career movers tend to have fewer reasons for leaving. In this case, they might say they're open to have a discussion about a possible career move.

Job hoppers tend to leave jobs for short-term problems and accept them for short-term positive reasons. This is represented by the upper left quadrant; what a person gets on the day he or she starts a new job--a title, salary, location and company. Career-oriented people tend to emphasize the lack of career growth for leaving a job but every now and then they get seduced by the short-term rewards. To separate the true career movers from the more common job hoppers, you need to dig a little deeper.

Determine the historical reasons for changing jobs. For the past few jobs, ask the candidate why he/she changed jobs and if the new job delivered on the goal. If it didn't, the person is likely changing jobs again within a year or two. This is what job hoppers generally do. To verify this job-hopper pattern, find out the criteria the candidate used to evaluate each new job. Job hoppers tend to accept jobs based on the short-term positives with little understanding of the actual job duties. Career movers take longer to decide and conduct more due diligence before accepting an offer, but even they make a mistake now and then.

Overall, too many candidates leave jobs for short-term problems and take new ones to obtain instant relief. This job-hopping mentality leads to the vicious cycle of underperformance, dissatisfaction, and excessive turnover shown in the graphic. Even career-motivated people can fall into this trap, being seduced by short-term promises, big bucks, and a nice title.

As I told my candidate many years ago, make sure the new grass is really greener. Don't make long-term decisions using short-term information. No one should.