In front of a packed room at LinkedIn Talent Connect, I shared that the future of recruiting is about creating an end-to-end hiring system. This system is based on six core principles that, if used collectively, will result in 3-4 top tier finalists for the open position in just a few weeks.

Here are these six principles which I believe will be crucial to transforming the way you hire:

Of course, talking about these principles as theory is easy but I wanted to show you how companies I work with are already putting them to practice. Over the next few weeks I plan on sharing how I am working with a small Portland company to hire for two important roles -- a sales manager and a marketing manager and how following this 6-step framework is producing great results.

Below is a deep dive on how we have tackled step 1 and parts of step 2 of the process outlined above:

Write job postings that remove the lid on quality of hire

A great job starts by preparing more compelling job postings. It’s important to note that even a top person who is fully qualified on a skills basis is unlikely to even consider an opening that on the surface appears to be a lateral transfer. For this project we asked the hiring managers to define on-the-job success by asking, “What would a person need to do in the job over the course of a year to be considered successful?” This resulted in 5-8 performance objectives for each of the jobs.

For the sales manager position the big one was to grow the sales team to eight all-star reps who could blow past their numbers. For the marketing position one task was to create a series of social marketing campaigns that were fully tested and ready to deploy at a moment’s notice.

The hiring managers instantly saw the value of this approach since it was clear to them that there were plenty of top people who could do the work who had a difference mix of skills and experiences than originally listed.

Regardless of the value of this type of job description, it isn’t something that should be posted as it is. In this case, we took some time to polish these and create marketing versions which went up as the official job postings.

Here’s the posting for the sales manager job and as you can see it’s totally different than the performance-based job description. 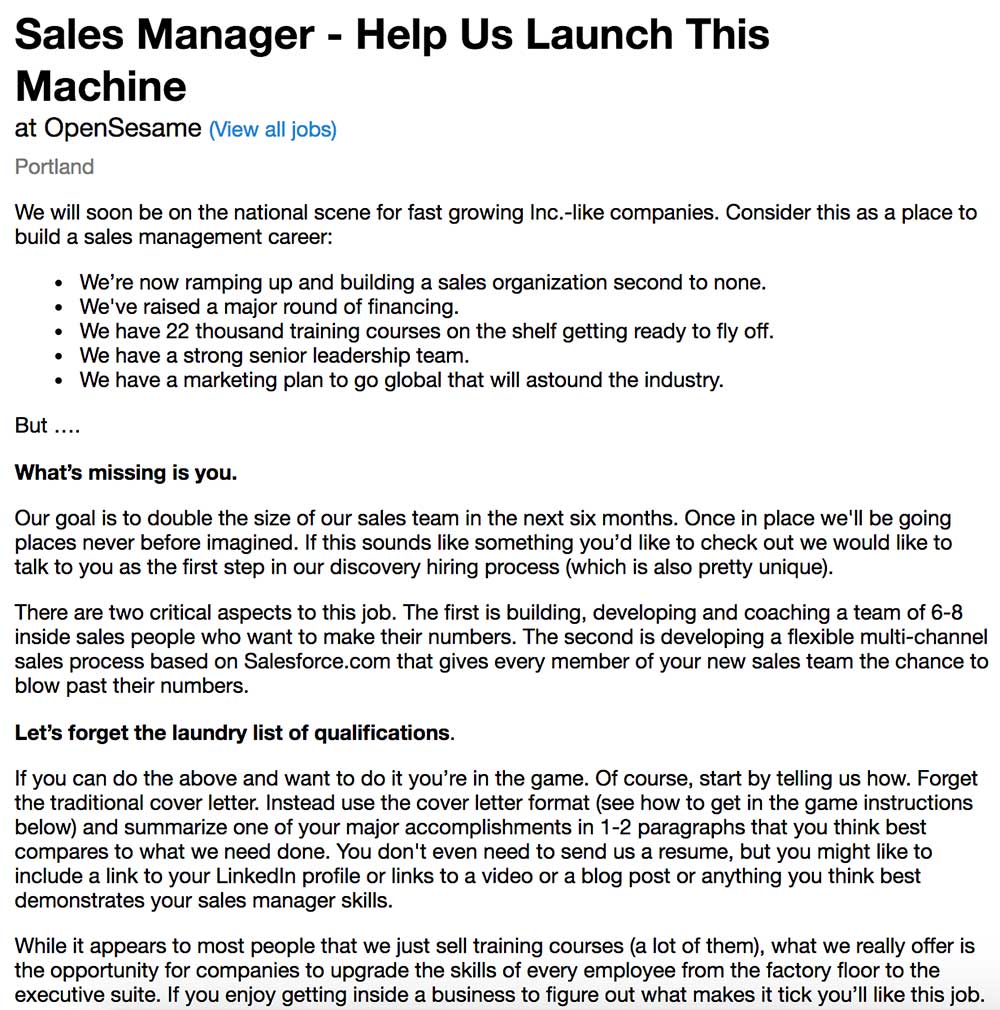 The posting highlights the ideal candidate’s intrinsic motivators and the employee value proposition in the first line. The marketing manager job posting does the same, but differently. 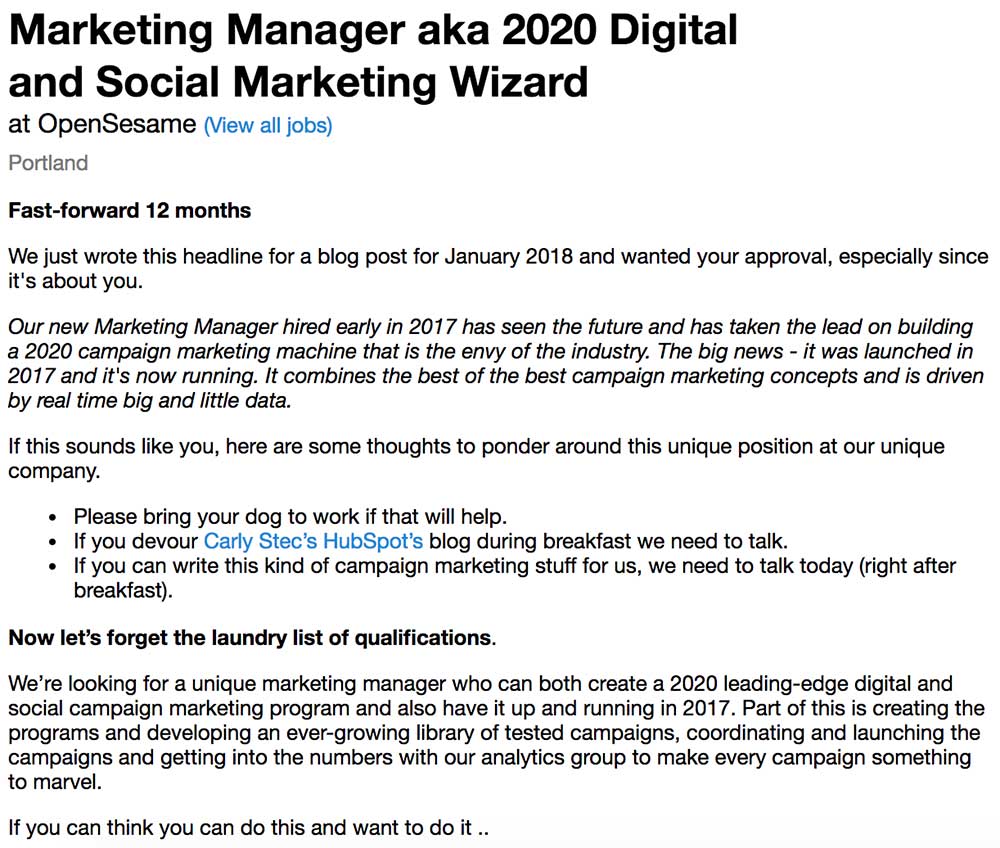 You’ll quickly note the lack of a laundry list of skills and the option to engage in a conversation about the job rather than having to apply.

A skilled recruiter is essential to convert interested prospects into serious candidates.

In part 2 I’ll describe how we used Clever Boolean to create the short list of candidates for both positions and the multi-pronged social media campaign to drive the response rate to over 50%. However, despite the huge response rate it’s important to note that since these people are top 25% talent, a recruiter needs to convince the person the job is a true career move. Following is one example of how this is done.

Last week I got an email from one of the recruiters on the project who was texting with a strong and interested prospect. The first thing the candidate wanted to know was the compensation range for the sales manager position. The recruiter texted, “Let’s first see if the job represents a career move, and then we can see if the compensation works.” The candidate texted back, “You’re good. Let’s talk tomorrow.” During the phone call the recruiter made the point that a career move requires a minimum 30% non-monetary increase. This consists of a bigger job, more rapid growth, more job satisfaction and more impact.

To determine if a job offers this type of career move requires a series of more in-depth discussions with the recruiter and hiring manager. This is the discovery process needed to determine if the job represents a true career move and if the candidate is motivated and competent to do the work. Since it takes more time, it’s important to only spend this time with strong prospects. As important, if the job isn’t right for the person the relationship developed using this process will result in some great referrals for the open job.