Your Best Candidate Is Less Than Three Degrees of Separation Away

At my Talent Connect 2017 talk in Nashville on October 5th, I’m going to prove that I can find top tier candidates within a few days for any job using proactive networking. But I need to have some examples to demonstrate the methodology first. So I decided to hold a webcast on August 17th (2017) to preview the program and get some of your hiring challenges into the mix.

Why referrals are “Recruiter’s Gold”

Long before Kevin Bacon, some brilliant math folks discovered that in a structured social network like LinkedIn, you were only three degrees of separation away from anyone. This is shown in the graphic. 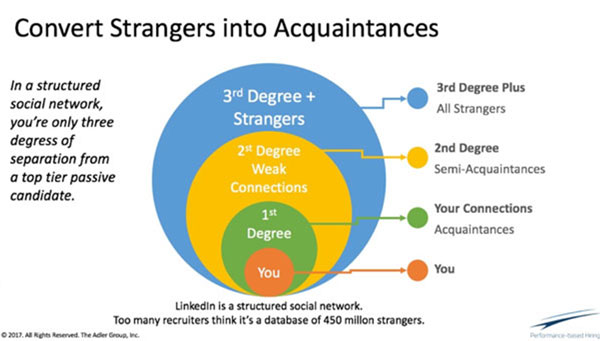 My recruiting philosophy is to spend more time with fewer more highly qualified prospects who have been referred to me. As important, I proactively seek out referrals of people who would naturally see my open job as a clear career opportunity without much initial convincing.

This is important to get high response rates from your emails and phone calls. For example, for a search for a Controller for a mid-size company, we looked for “big four” CPAs who were currently directors of accounting at bigger companies. The first line in the email said, “Get out of the numbers and make a difference.” This approach worked very well, but when I put the referrer’s name in the email everyone called back vs. about 35%. That’s part of why referred candidates are golden – they call you back! While this is important, the more important part of this is that I only sent emails and made phone calls to people who were highly qualified.

To start getting the referrals, I first called up people I knew who would have worked with these types of people in the past. For the CPA search, this was easy since I had plenty of first degree connections in senior accounting roles. So I just connected with a few and asked, “Who’s the best person you know doing this type of work?” This generated a few target names.

Recruiters who are specialists in a field have this obvious advantage, but many recruiters are generalists, so they must build these first-degree connections on a just-in-time basis. In these situations, and as part of preparing a Candidate Persona (FYI: this is like a marketing plan describing how to find and attract your ideal candidate), I suggest that recruiters ask this question first: “Who would have worked with my ideal candidate and could provide a strong referral?”

For a national accounts manager search for a company distributing power tools, I called the buyers at Home Depot and Lowe’s to get names of top sales people. For a VP engineering search, I connected with managers in similar industries and asked who the best boss they ever had was and would like to work for again.

We helped a big electronics manufacturing company dramatically expand its employee referral program using a similar reverse networking concept. We just suggested that recruiters first use LinkedIn to search for and connect with employees they don’t know but who would have worked with their ideal candidate. Since you can search on your first-degree connections’ connections using LinkedIn Recruiter, it’s easy to find a few top candidates on your own, then just ask your new connection if the person is strong and if you can use the new connection’s name as a referrer.

Building a network of first-degree connections who would have worked with your ideal candidate is the big point here. But you can’t wait passively for them to refer people to you. Instead, you need to proactively search on their connections to get some great referrals.

There’s a philosophical point in all this. Recognize that when you contact a stranger there is a wall of distrust that you must first break. If you’re successful, you then need to get the person interested in your job, and if so, qualify the person based on their skills, experiences, title, responsibility, compensation needs and location. I consider screening people like this not only a waste of time, but also disrespectful. It’s certainly not recruiting.

However, by saying, “Mary Jones suggested I contact you about a potential career move,” you’re more likely to have a totally different and more open conversation. As important, you wouldn’t have called the person unless Mary Jones thought the person was highly qualified and a good fit for the job. Now all you have to do in the next 10-15 minutes is convince the person your job is a potential career move. If not, connect with the person on LinkedIn and get some other referrals by searching on the person’s first-degree connections.

None of these problems exist when the person has been referred. Initial conversations with these second-degree weak connections are similar to those with acquaintances, so the discussion is more open and honest. Rather than screening out people, you’re just having a natural conversation about the possibility your open job represents a true career move. That’s why I advocate a go-slow process, spending more time with fewer highly qualified people. Getting connected to these fewer highly qualified people is what real recruiting is all about and why these referrals are called “Recruiter’s Gold.”